The late Peggy Cooper Cafritz was many things: a lawyer, an author, an activist, but most of all, she was a collector. The patron and advocate for contemporary African and African-American art, who passed away in February, leaves behind one of the largest private collections in the country, an assortment reflective of both her political convictions and bold personal style.

Cafritz was born in 1947 into one of the most prosperous black families in Mobile, Alabama. Segregation led the family north, where she attended boarding school and, later, George Washington University. It was in college that Cafritz co-founded a summer program that evolved into the Duke Ellington School of the Arts, created to nurture minority artists.

The law school grad went on to work as a programming executive and documentary producer in the 1970s, winning both Emmy and Peabody Awards for her work. During the following decades, she chaired the D.C. Commission on the Arts and Humanities, and later served as the President of the Board of Education in D.C.

By 2009, over 300 pieces of art populated the Regency-style mansion Peggy owned in the tony D.C. neighborhood of Kent with former husband and real estate developer, Conrad Cafritz. The gabled estate, filled to the brim with English antiques and works from the likes of Jacob Lawrence, Kara Walker, and Kehinde Wiley, became a hub for people as well as things. Activists, politicians, artists, and friends, including Bill Clinton, Gloria Steinem, and Quincy Jones, were frequent guests to the saloniste’s famed parties and events.

In 2010, a fire destroyed the house and collection, worth millions, in the largest residential fire the city’s seen to date. When she moved into a $3.25 million dollar industrial duplex in Dupont Circle, Cafritz told The New York Times, “I wasn’t going to reconstruct what was, but to look at everything anew.” The decidedly modern space was a sure departure from her last home, but the patron continued to collect with the same voracity as before. 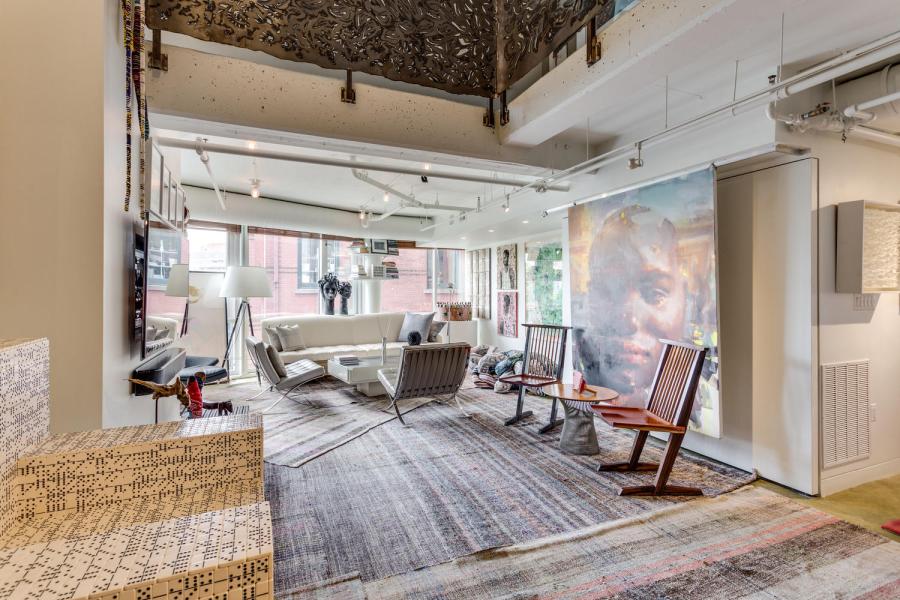 With an art collection as robust, colorful, and eclectic as hers, it’s no surprise that the décor followed suit. Cafritz enlisted friend and interior designer Paul Siskin to curate her larger-than-life tastes. As she told O Magazine, “It’s all about an eye party. Which is governed by my gut. By, what do I love? What do I think is amusing? What do I think is beautiful? I’ve never bought anything because it matches something else. Never!”

An eye party it is. The sprawling space is a maximalist’s dream, layered with pieces from all periods and styles. A B&B Italia swivel chair mingles with traditional Nepalese rugs and multicolored dhurries, while a Triennale-style floor lamp sidles up next to a sofa from Restoration Hardware.

There were no rules to Cafritz’s aesthetic, which is what makes it so utterly compelling. Such a singular personality has crafted an equally singular collection, which we are both proud and honored to bring to Sotheby’s Home.

Learn more about Peggy Crafritz bequest of 400 works to The Studio Museum in Harlem NYC, and the Duke Ellington School of the Arts in Washington, D.C., here.

6 Pieces That Look Best On A Coffee Table

6 Pieces That Look Best On A Coffee Table